Not often do we have the ability to follow a rescue for a decade or more but we invite you to enter "Heaven's Gate!"

Little bitty pretty thing..she was so small, frail, weak..no one wanted her! It was hard to understand but. 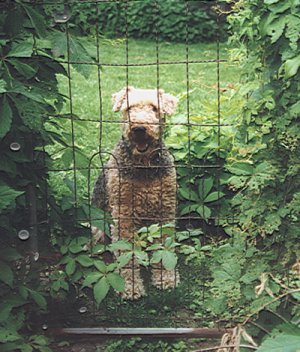 And I did my research! Femoral head osteotomies were a last-ditch, irreversible operation.yet, what my vet was recommending! I did my research; I scanned the x-rays.she had no hip sockets.there was no choice.and I cried! She was so sweet..

I'd rather give her a chance than condemn her to death and those were my options.. I opted for the chance..

And I said, "Take out the worst hip first.if it doesn't work, at least she'll still have the better hip with which to navigate"..and that's what we tried! And tried!! And failed!!

The vet recommended following behind her and elevating the "unrepaired hip" above her body to force her to put weight on the surgically repaired hip! But she learned quickly.every time she saw me coming, she'd simply sit down!

Three weeks later she was walking and a week after that she was trotting!

And then Doris called! She'd just lost a 13-year old Airedale and desperately wanted another and I said I had none available for adoption but she pleaded and I relented and I said, "Well, you can come see this puppy"; I thought it would be a "fix" for her while I tried to find her an appropriate dog.if any.perhaps an older one (she was in her 70's and I don't normally place an Airedale ..)

Then there's this heady thing.kinesis.It was automatic, undeniable, irrevocable!!!

But Doris left that day with the puppy! I insisted, of course, that she be taken to her trusted vet and that the nature of her surgeries be divulged and set up a conference between the surgeon and her vet .to explore her baggage!

The phone rang..endlessly! It was Doris."I ran into a young man today who said that the club was having a picnic! Why wasn't I invited?" I said, "Gosh, Doris, you're always invited.I just haven't gotten the newsletter out, yet.!" "Well, have to go", she said, " I'm on my way to a dance recital..let me know!"

"And, by the way, did you get the picture of Cutie on her new chair"? Doris inquired! "Yes!" It was eleven years and six months ago.that I got the first picture of Cutie on her chair...It was eleven+ years ago that I got the "this is not working but how can I fix it call" ( she likes to snuggle, I don't; so I run to the other side of the bed and she's there to greet me...and I don't want to hurt her feelings call)! 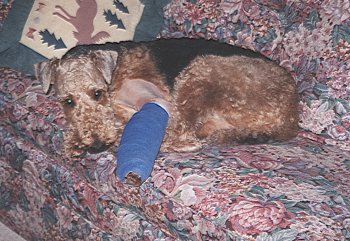 There are many wonderful dogs available through Airedale rescue! If you'd be interested in learning more about them, please contact a regional rescue volunteer!